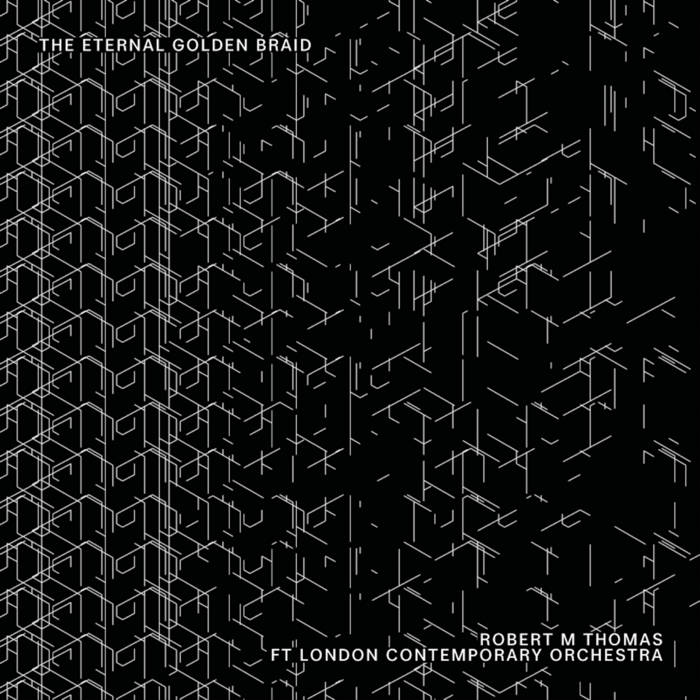 Robert M Thomas’s piece The Eternal Golden Braid was the climax of one part of the triptych entitled Strange Loops that I curated for the Barbican’s Life Rewired season. The title of the triptych had its origins in one of the central ideas introduced in Douglas Hofstadter’s cult book Gödel, Escher, Bach. Strange loops can be found bubbling underneath the work of this eclectic trio. But for Hofstadter the idea of a strange loop not only provides insight into their work but could be the secret to understanding what makes our brains conscious. An Eternal Golden Braid is the subtitle for Hofstadter’s book and became the name for the concert we staged at the Barbican exploring musical strange loops from Bach’s Musical Offering to Robert Thomas’s exciting new composition.
- Marcus du Sautoy, Professor of Mathematics at the University of Oxford.

This piece started life as a collection of renderings from a machine learning process which was trained on a large database of works by Bach. I then curated some fragments from it and used them as a starting point for a composition for string trio. You can listen to some of the raw machine learning in track 5. We wanted to explore having the audience interact live with the music in a collective strange loop, so I constructed the piece in two "levels" which the players could move between at any time. Level 1 was calmer and more introspective and represented by Blue. Level 2 was more chaotic and extroverted and represented by Red. When the piece was performed the audience held up coloured cards, which were recognised by a machine learning camera on the stage. This fed a signal to the players which told them which musical notation to read. Composing music using machine learning within the human creative process is fascinating - far more interesting than automated machine learning composition. I think paradoxically machine learning can really help illuminate what consciousness really means and what music really means for us as emotional human beings.

This EP features both levels performed all the way through, and two interactive performances - the recording from the Barbican performance and a studio version controlled by the players themselves. Finally, it also features some of the original machine learning output and a soundscape "strange loops", which includes some additional elements from the show.
- Robert M Thomas

Sign up to the Robert M Thomas newsletter to learn about upcoming music releases and concerts as well as exclusive free music, software and sample libraries bit.ly/rmtnews

Bandcamp Daily  your guide to the world of Bandcamp